Oscar Deutsch achieved so much in his short short life. He died of liver cancer five years after the opening of Chester’s Odeon at the age of 48. Prior to his death there were business associations with Kingston upon Hull born and bred, Joseph Arthur Rank, a flour miller, and a powerful business man.    With middlemen controlling the distribution pipeline from production to exhibition, Rank had, in the earlier thirties, decided to buy a large part of both the distribution and exhibition systems. He began by forming a partnership with film maker C. M. Woolf to form General Film Distributors, which was incorporated in Rank’s General Cinema Finance Corporation.  Having first created a film production company and having made a movie at another studio, Rank began talking to Charles Boot who had recently bought the estate of Heatherden Hall at Iver Heath, Buckinghamshire, for the purpose of turning it into a movie studio that would rival those in Hollywood. In 1935 Pinewood Film Studios went into production. American films occupied 80% of British screen time during the era before World War II. In 1938 he bought into the Odeon Cinemas chain.   Rank was able to inject much needed cash into Odeon as it’s portfolio of new cinemas were expanding at a breath taking rate. Together with other cinema circuits, distributors, film studios that were absorbed into the business, creating a formidable force of competition in the heyday of cinema going. In 1941, Oscar Deutsch’s widow sold her shares of Odeon to Rank. The same year he took control of  Gaumont British, which owned 251 cinemas, and the Lime Grove Studios, (later owned by the BBC) and bought the Paramount Cinemas chain, so that by 1942 Rank owned 619 cinemas.The famous gong man was revamped from the trade mark of General Films Distribution. Now re-shot, with a boxer~ Bombardier Billy Wells as the oiled up gongman, and the name J Arthur Rank superimposed across the gong. During the 1940s, the companies Rank controlled produced some of the finest British films of the period, including: The Life and Death of Colonel Blimp (1943), Henry V (1944), A Matter of Life and Death (1946), Black Narcissus (1947), and The Red Shoes (1948). J.Artheur Rank was a devout member of the Methodist Church.

Despite being a deeply religious man, he enjoyed attending premieres with the many British stars that were on contract to him. From the 1950s fewer adventurous films were attempted and solidly commercial ventures, largely aimed at the family market, were made instead. These include the popular Norman Wisdom comedies, The various Doctor~ films. However some films of note were produced during this era including: Carve Her Name With Pride (1958), and Victim, (1961) as well as a clutch of prestige topics such as the coronation of Elizabeth II in 1953 and filmed performances by The Royal Ballet. Other interests were acquired (such as the Bush Radio company in 1949) The acquisition of companies continued, led not just by J Arthur Rank, but by John Davis, an accountant with the talent for spotting opportunities to develop the company into one of the most powerful organisations, in fact THE RANK ORGANISATION. Attention was seldom drawn to Ranks next in command John Davis, who preferred it that way. It was known throughout the industry that John Davis was the driving force.

Without doubt, John Davis was one of the most influential and unpopular figures in the British film industry, who rescued the Rank Organisation from financial chaos in the late ’40s but, in doing so, led film-makers to look elsewhere.

Rank took partial interests in a television franchise in 1958. Together with Associated Newspapers, and D.C. Thomson & Co, they were the successful applicants/shareholders for the ITA Southern Television contract.  Southern Television went on air on Saturday, 30 August 1958.

Television was becoming increasingly popular and cinema audiences were declining. Consequently, the company lost its hold on the film industry, although it continued to invest in the entertainment industry helped by money raised developing and marketing the Rank Xerox photocopying machine. John Davis visited Chester Odeon during 1972, when rumours were circulating that the cinema was to be tripled, with a rare extra budget required to extended the circle towards the screen, which would give the main screen over 800+ seats. Davis later recommended the board to approve the budget, which it did.

Rank retired as Chairman in 1962 and was succeeded by John Davis, who had been Managing Director since 1948. In 1957 J. Arthur Rank was raised to the peerage as Baron Rank, of Sutton Scotney in the County of Southampton. He died in March 1972, aged 83, when the title became extinct.

Odeon Cinemas was sold by The Rank Organisation in the early 1990s to a venture capitalist company- Cinven. It was then sold on again to a similar company- Terra Firma.  The freehold sites were sold off in favour of rented units. The business has been rejuvenated with new multiplex builds, and continues to operate in the UK under the Odeon badge. It’s current owner is AMC Theatres. 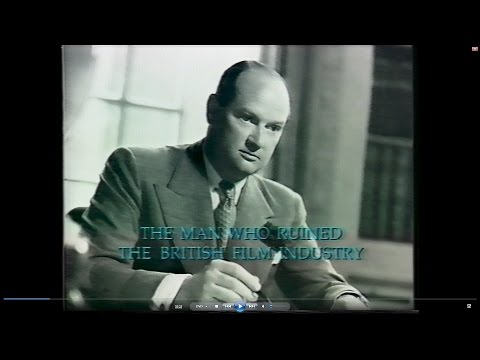 Joseph Arthur Rank was born in Kingston upon Hull on the 22nd December 1888 and passed away at the age of 83 on the 29th March 1972. Before the film business beckoned he was involved in his father’s flour business called Joseph Rank Ltd, which was formed in1875. They owned five of the largest flour mills, which were in Hull, London, Barry, Birkenhead and Belfast. In 1938, two years before Deutch’s death, Rank took over the Odeon chain. Paramount cinemas, an American chain were taken over by Odeon and renamed Odeon. He also merged with the Gaumont British circuit, and in 1941 he was elected the new chairman of Gaumont British Picture Corporation Ltd, after Isidore Ostrer resigned. By 1942 Rank was running 619 cinemas. In June 1948 Circuit Management Association was formed.

In 1957 he became Baron Rank of Sutton Scotney in the county of Southhampton and was the chairman of Rank’s Ltd, Joseph Rank Ltd and Rank Organisation Ltd. Rank was a director of fifty-two companies. Apart from running the Odeon circuit, Rank was also involved in film production at Pinewood. He also took over the Bush radio company in 1949. One of the tricks was to include a Bush radio or record player in some of their films. No doubt a number of sales were made this way.

In 1962 aged seventy- three he retired as the chairman of the Rank Organisation and was succeded by fifty- four year old John Davis who had been the managing director since 1948. In 1949 the organisation was on the brink of collapse and they were sixteen million in the red. Production was rock bottom. Within the next six years the company bounced back and the deficit had become a surplus.