HERE IS THE NEWS! ~ CINEMA NEWSREELS

Newsreels were an important part in Chester cinema programmes. Numerous companies were formed to supply the news. However, for the bulk of UK cinemas, it was Movietone, Gaumont British and Pathe who became the front runners, each claiming to be the best, all three being familiar to Chester cinema audiences. The narration on some newsreels tended to be over the top “plummy”, which generally amused the more down to earth cinema goers, even when the subject was of a serious nature. Many narrators brought the news in a dramatic fashion. the most recognizable voice was that of Pathe’s Bob Danvers Walker(pictured). He also voiced over TV’s “Take Your Pick”.
In Chester the ABC Regal showed the Paramount newsreel, then later switched to Pathe News. The ABC Regal shared the copy of Pathe News with the Tatler. Bemused passers-by would witness the case containing the newsreel being transported between the two cinemas via a wire rope with a pulley winch, high above The Swan Hotel car park. Sharing the same print became common practice with the remaining Chester cinemas. The Gaumont showed Gaumont British News, whilst the Majestic showed Movietone. Later copies were shared between the Gaumont and Majestic, both cinemas standing on Brook Street. The Odeon and the Music Hall being within minutes walking distance shared their print.
The radio and newspapers were of course the quickest way the UK obtained news during the first four decades of the twentieth century. Although most people were knowledgeable of events, the cinema was the only source that the news could be witnessed visually. The few days delay in seeing the events after reading, or listening about it, was at that time acceptable. 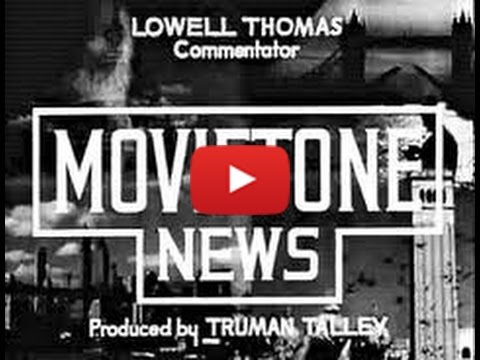 To keep the news fresh, the newsreels were changed mid week. The film was in black & white. Colour was seldom used, even into the sixties.Usually colour was reserved for Royal events. The newsreels were very popular with the millions of cinema patrons. They avoided controversy, supported the political status quo, and the Royal Family. Newsreels could often engage very effectively with the issues of the day, and during the Second World War they found their voice and served as an important means of communicating vital news mixed with propagandist uplift.

Always attempting to amuse rather than to challenge their audience. Given the minor place that the newsreel had in the cinema programme, and the need to keep exhibitors happy, the newsreels had little choice but to take a light, uncontentious route, but they were often criticized for making light of the events. In attempts to get the news on the screens quickly, the cinema newsreels were known to cheat, using old clips of past events. On one such occasion, the trooping of the colour, one company decided to use clips of the previous year, the bad news for them was that the Queen rode a different coloured horse, leaving a red faced editor to run for cover!.

The newsreels lost their validity with the rise of television in the 1950s. BBC Television News marked the beginning of the end for the newsreel companies in UK cinemas, with most of them closing  by the end of the decade. Cinema newsreels became instantly outdated, and “old news”. In the early 60s,  “Look At Life”, a tedious weekly short film came into Rank’s cinemas replacing the spot held by the newsreel. Pathe had been running Pathe Pictorial as a programme filler, but held onto both the newsreel and Pathe Pictorial until 1970, when it became unrealistic to compete with the instant TV news.

British Movietone News, soldiered on until May 1979. It was the last one to go.

Now the newsreel libraries are managed by companies who are supplying their vintage clips to television, and numerous outlets, maintaining a thriving business. 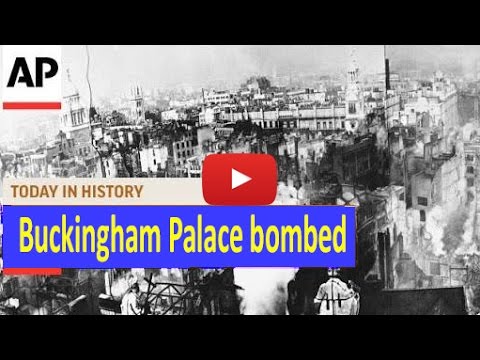 In 1960 cameraman Ronald Collins moved to Movietone News, which was based in Soho Square and was part of 20th Century Fox. He was appointed by Paul Wyand, the assignment manager as an assistant cameraman and was given a six-month trial. Wyand had been Movietone’s chief cameraman and had written a book about the newsreel business and his life as a newsreel cameraman called ‘Useless if Delayed’.

Movietone opened for business in 1928 and it is likely that one of the first cameras was the Bell and Howell Eyemo. Another camera that was in use was the Wall camera, a sound on film system by Movietone. It later adopted under licence the Western Electric variable density system until Movietone went over to magnetic recording. The Wall camera recorded sound only nine frames ahead of the picture, which meant it had to be edited before it could be projected twenty frames ahead. The Wall had a four-lens turret, which could be rotated while shooting. The Newman and Sinclair camera followed. Another model used was the Cameflex by Éclair. This camera was used until Movietone News closed in 1979.

Collins first solo assignment meant he had a heavy ancient Newman and Sinclair camera to operate. His task was to provide two minutes of screen time of the Christmas lights in Oxford Street, London.

The Newman and Sinclair cameras had been in use from the early 1930s and were used on many documentaries. Stanley Kubrick used one on some sequences of ‘A Clockwork Orange’. As an assistant Collins worked alongside a chap named Norman Fisher, who was then chief cameraman for Movietone.

1963 saw Collins became a fully-fledged cameraman on a weekly wage of twenty-two pounds. With Fisher he worked on Movietone’s contribution to the TV programme ‘This Week’. Fisher and Collins were responsible for shooting whole sections of the programme. They were both engaged to shoot sequences for the hit TV cop series ‘No Hiding Place’, using a 35mm Arricord self blimped camera. Other work included filming documentaries to promote movies produced or distributed by 20th Century Fox. These included ‘The Longest Day’ and ‘The Sound of Music’.

Asked if there were any assignments that stood out, he said, “One that stands out was being invited to Windsor to shoot material for the Queen’s forty-second birthday with her family. That was a privilege. The film was in colour and that material was used by the BBC every night when their service was closing down.”

Collins was one of the cameramen that covered the funeral of Sir Winston Churchill in 1965. 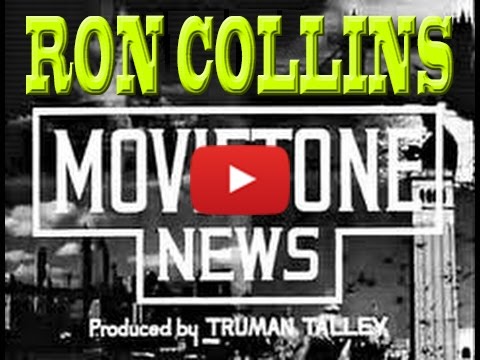 From 1963-1967 Movietone continued to supply United Press International Newsfilm (UPIN) with 16mm films for the news service. Collins said that newsreel companies made a lot of commercials for television in the early days of independent television.

Often he would be a one-man band, operating, directing and doing all the other required skills. He said there were no set hours. It really depended on where the job was located. Sometimes it could be done in a day; sometimes you needed to stay in a hotel.

When going on an assignment how much film did he carry? “You were told by the editorial staff that we want two or three minutes of material depending on the importance of the story and if it was in black and white or colour. On 35mm you would always take two magazines to cover the story and maybe a third as a back-up.”

Collins gained a reputation for his work in sport. In 1968 he worked on the Mexico Olympic games and was DP on a number of feature documentaries. He was employed by Movietone for ten years, leaving in 1968 to do other freelance work. Between other work he carried on working for Movietone on a freelance basis for a further ten years. When working abroad did he hold on to the unprocessed film until getting back to England? “In the majority of cases we held on to the film until we got back because the stories abroad were mainly soft news stories – they weren’t what we called hard news stories.” Collins said he doesn’t regret one moment of it. He worked with about eight cameramen. One of them was the late Michael Samuelson, brother of Sir Sydney. “I was able, while training to pick up their best points,” he said.
Collins won two awards for his news work. In 1968 he won the World Newsreel Award in the general news category for a soft news story called ‘On the River’. In 1981 Collins was part of the film crew that filmed football sequences in the John Huston movie ‘Escape to Victory’. In October 1999 Collins was awarded a Fellowship of the British Kinematograph Sound and Television Society (BKSTS). It was for services and innovations provided to the film and television industries. 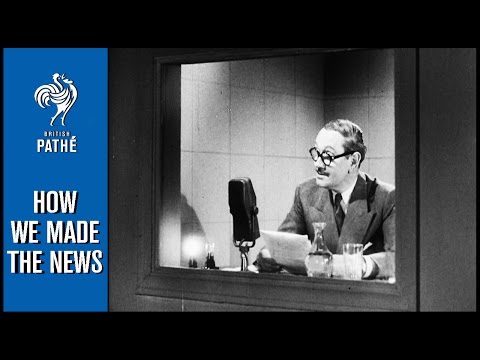 6 Newsreel commentators. Click the above frame to view the video.