With the Odeon cinema circuit expanding through the 1930s at breath taking speed it’s founder, Oscar Deutsch was determined that a cinema in London’s West End was to be built to showcase not only the latest film releases, but to promote the Odeon brand. This was to be the most important addition to his cinema portfolio.  His attention was drawn to the Alhambra Theatre (1883-1936), that occupied a prominent position on the east side of Leicester Square. This tired but magnificent theatre had been due to close by 1933, with several alternative plans for re-development already drawn up, one of which was to construct a ‘Palace of Amusement’. Oscar Deutsch quickly bought the Alhambra, purely with the intention of demolishing it and to build his new cinema on the site. The land value was in the region of £500.000, dwarfing the budgeted construction costs of £232,755. The combined cost was therefore £732.755, an unprecedented single site investment for Odeon.

Many questioned the fate of the fabulous Alhambra theatre, but there was no preservation  protection on such buildings at that period of time, if there had, it is likely that Mr.Deutsch would have had to look elsewhere. Music hall acts continued at the theatre until 1st September 1936. Oscar Deutsch lost no time in turning the site around. Demolition of the Alhambra and the adjoining Turkish baths took place within two months of their acquisition.

The architects were Harry Weedon and Andrew Mather with the building contract being awarded to Sir Robert McAlpine & Sons Ltd. It was to have a  landmark 150′ tall tower that could be seen even in the early stages  of construction, this was reduced to 120′ to meet height limit requirements. The wrangle over the design rolled on into the following year. Many irons were in the fire from both architects practices. The conflicting opinions of those involved with the hastily prepared  drawings “reflected in the finished item”, as one of them later stated. Numerous drawings were prepared for consideration. It is thought that the assistants behind the successful design were Andrew Mather’s assistant, Thomas Braddock, with Harry Weedon’s, Arthur Price contributing into the pool of the building’s planning. The final agreements were made in March 1936, and building work commenced at full pace with the steel work quickly taking shape. This prestigious cinema was to be in contrast to the house style of Odeons ocross the circuit in as much as the light coloured faience tiles on the facade were to give way to 200 6’x5′ 2″ thick black granite slabs. Harry Weedon’s architect, Robert Bullivant later led a scathing attack regarding the frontage, stating that “it was a compromise and a failure because there was not one predominant architect in charge of the job”. 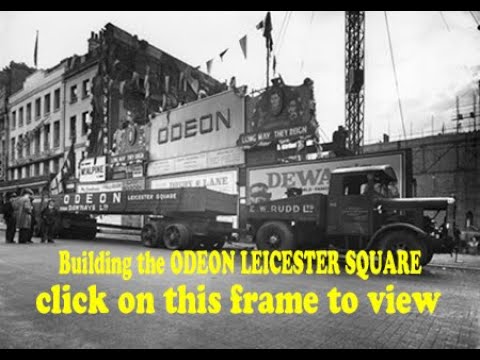 With a capacity for 2116 patrons. 1140 seated in the stalls and a further 976 accommodated in the balcony, the projected cost was approximately £110 per seat, representing a serious investment and the highest to date for Oscar Deutsch. Work progressed at break neck speed, with construction taking just seven months to completion. Even so, the planned opening date was put back to Tuesday 2nd November 1937.

The frontage created a powerful statement that this cinema was the crowning glory of a massive modernistic UK cinema circuit portfolio that had been quickly built up by Oscar Deutsch.

The imposing tower, bearing two Odeon signs that shared the first letter”O”, was set to the left of the dazzling polished black granite tile blocks that clad the tower and complete facade. Six sets of double glazed entrance doors, each glass insert etched with sketches of animated dancers and animals of the seasons. Above the entrance doors was a shallow stepped canopy containing a state of the art horizontal moving neon sign, above this was the recessed balcony foyer windows, topped by a large bronze canopy which had the Odeon sign placed centrally. An enormous rectangular recessed area was above the canopy, which was designed to accommodate the illuminated letters and large displays promoting the attractions. The tower, building and edging features were trimmed with neon.

The high ceiling entrance foyer with it’s wood panelled walls and uniquely patterned carpet established a tone of quality, perhaps with the reflection of the future discerning patrons who would frequent this flagship Odeon. The stairs and doors to the royal retirement room, set at basement level,  were located from this foyer. The area assigned to this entrance foyer, although wide and lofty was some what restricted. Surprisingly, there was just one double staircase on the left hand side of the entrance doors, which split on a small landing, leading patrons to the enormous balcony foyer.

The huge and lofty balcony lounge was designed with the intention of hosting lavish receptions. The walls again had wood panelling, complementing the panelling on the entrance foyer walls.

Lillian Deutsch at work on the interior design of the Odeon Leicester Square.

The usual Odeon soft furnishings were replaced by those of a more conservative type in an attempt to give this flag ship cinema the edge. The fitted carpet was subtle in pattern and colour, further enhancing the feeling that you were somewhere special.

The auditorium was certainly different. Bands of ribbed fibrous plasterwork ran the width of the ceiling and continued down the side walls. Lighting coves and ventilation ducting were concealed within these bands. Towards the proscenium the straight lines of these ribs gave way to generous curves and waves, beautifully worked in to the curve shaped wooden panelled dado.

Workmen putting the finishing touches to the original “Flying Ladies”.

Features set into these waves that radiated towards the screen on either side of the splay walls were the “the 8 Flying Ladies” or “surfers” portraying the miracle of light, as explained by the publicity of that time. A triumph for their designer, Raymond Briton Riviere.  The seating upholstery caused a stir, when a brash, faux leopard-skin material was chosen. The stalls seats were of a standard design, whereas the circle chairs had winged padded backs, and sprung seats. To bring some relief from the garish seating, the carpet was a plain gold colour.

A Compton organ was installed. Boasted to be one of the finest in the UK. It originally had  an impressive 17 ranks of pipes played by five keyboards (manuals). The unique illuminated organ console side casings were designed by Charles Theobalds and Andrew Mather, with an outwardly curved frame that blends in with the auditorium curves rolling towards the proscenium, certainly making an impressive appearance as it rises from the orchestra pit on it’s central lift.

James N Bell~ The first organist to play at the Odeon Leicester Square. He is pictured at the organ console at the Carlton cinema, Tuebrook, Liverpool, that he had also opened during 1932.

Organist James Bell beat off strong competition to officially open this prestigious instrument which would later be known affectionately as “the Duchess”.  However, prior to this, J. I. Taylor of the John Compton organ company invited several famous organists – including Quentin Maclean and Reginald Foort – to an unofficial preview.

At the Compton organ of the Odeon Leicester Square, James N Bell who officially opened the instrument.

In fact the complete floor of the orchestra pit could rise to stage level to form an apron, thus extending the performing area. It has a full working stage, complete with fly tower, and a colourful safety curtain depicting film, a seated audience, spotlights, cameras, etc. 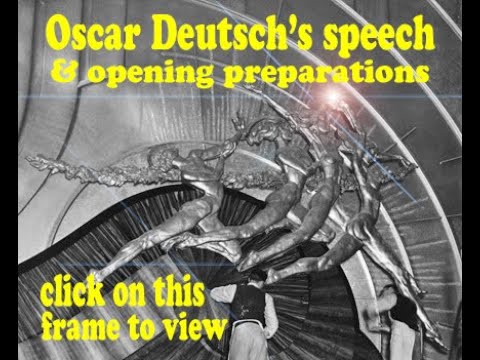 In advance of the opening day, the Lord Mayor of London was invited to the building that was still clad in scaffold.  The guests listened to Oscar Deutsch deliver an eloquent speech as he invited the Lord Mayor to unveil a plague that acknowledged the architects, Andrew Mather and Harry Weedon, also the building contractor, Sir Robert McAlpine, for their collective part in constructing this iconic building.

The Duke & Duchess of Gloucester at the opening night of the ODEON, Leicester Square.

The opening on Tuesday 2nd November 1937 was the grandest of occasions. The Duke and Duchess of Gloucester were in attendance together with dignitaries, film producers including  Sir Alexander Korda, and numerous film stars that included Merle Oberon, George Formby. Lillian Deutsch would later state that “it was a real party night”.

Staff at the Odeon Leicester Square.

The immaculate uniformed staff of the Odeon cinema, Leicester Square, photographed in the circle lounge on the opening day.

Within three years of the triumphant opening of this flagship cinema that marked the pinnacle of Odeon’s success, both Oscar Deutsch and Andrew Mather had died at an early age. However, this cinema was to be their legacy to all that is good in British cinema design. “Our most important work” as  stated by Oscar’s wife, Lillian Deutsch.

Over the years numerous artists have appeared “live on stage”. Hundreds of Europe’s biggest film premieres have taken place at the Odeon Leicester Square, and not forgetting the glittering Royal Film Performances.

Technically, every credible advancement in cinema technology has found it’s way to this cinema.

The projection room at the Odeon, Leicester Square, London, 1937, showing spotlights and one of the original projectors.

The building has had many refurbishments, and structural changes, whilst claiming to remain unchanged. It has been modified over time – a modernisation in 1967 removed some of its original features; a rethink in 1998 put some of them back. But it retains its original scale – and it was sensitively renovated again last year .

A recent major overhaul of the building has seen the present owners transform the cinema into an Odeon Luxe, with the first Dolby Cinema(tm)screen in the UK.

Major changes to the foyers and retail areas, has seen the cinema expand it’s facilities with lifts and escalators installed.

To the upper lounge and Oscar’s Bar via the newly installed escalators.

The fully refurbished auditorium transforming it into not only a Luxe Odeon, but the first Dolby Screen.

A side view from the stalls area.

The stalls area has been reduced and now holds 259 Luxe recliner seats. The front circle is now re-branded as the Royal Circle. It has an exclusive central Royal Box block containing “22 sumptuous full-recliners with extra width for the ultimate indulgence”.

The central Royal Box in the balcony of the Odeon, Leicester Square.

The remaining Royal Circle seats are Luxe recliners. The rear circle has 446 regular seats in matching upholstery.  The total capacity is now 794 seats, in line with the modern approach to cinema exhibition which adds quality  to the visit experience, rather than the quantity of customers.

The significant investment by AMC, the owners of Odeon, is an encouraging sign that this iconic building will continue, not just as a flagship to the Odeon circuit, but will maintain it’s place as one of the most important venues for movies for many years to come.