The premiere of HAMLET (1948) at the Odeon, Leicester Square. This was the first time that the King and Queen had attended a film premiere when the film was not a Command Performance.

HM King George VI with HRH Princess Elizabeth for the presentation of “Hamlet” 1946.

King George VI, Queen Elizabeth, Princess Elizabeth and Margaret and the Duke of Edinburgh attended the premiere of Sir Laurence Olivier’s ‘Hamlet”. Also present were Mr and Mrs Stracey, Mr and Mrs Herbert Morrison, Ernest Bevan, Aneurin Bevan and Jennie Lee. Laurence Olivier did not attend as he was in Australia. 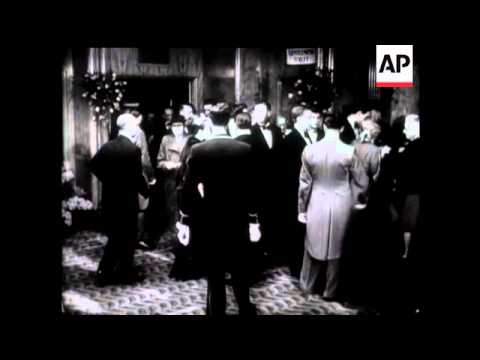 The film premiere was the Royal Command Performance Film Gala on October 26, 1953 at the Odeon Leicester Square in London.

The Queen is escorted by film chief Reginald Bromhead and is introduced to Cecil B DeMill. (right) 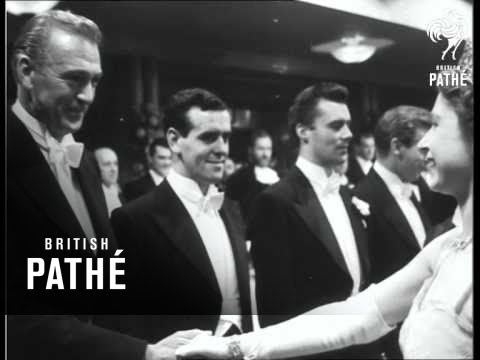 Queen Elizabeth II and Prince Philip attend a Royal Film Performance of ‘To Catch a Thief’ at the Odeon, Leicester Square, London, October 31, 1955.

Queen Elizabeth II and Prince Philip attended the Royal Film Performance premiere of “To Catch A Thief“ at the Odeon, Leicester Square, London. Within a year the star of that film, Grace Kelly was royalty herself, and in 1966 was pictured with the Royal Family at the opening of Ascot.

HM Queen Elizabeth arriving for the Royal film Performance of “To Catch A Thief” 1955. 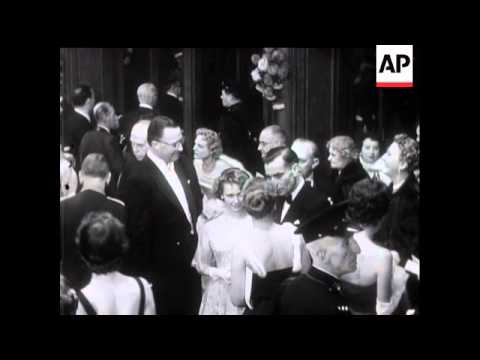 HM Queen Elizabeth is welcomed to the Odeon cinema, Leicester Square by the manager, Peter Hall. 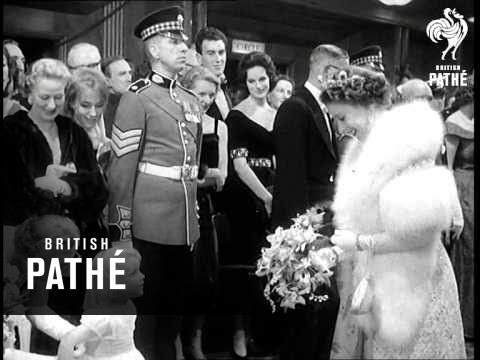 Queen Elizabeth II (wearing the Girls of Great Britain & Ireland Tiara and the Greville Ruby and Diamond Floral Bandeau Bandeau Necklace) attends the premiere at the Odeon cinema, Leicester Square for the premiere of Peter Glenville’s comedy, ‘Me And The Colonel’ on 10th October 1958.

Sylvia Fine shakes hands with the Queen as Danny Kaye looks on. The premiere of “Me and the Colonel.” 1958.

Frank Sinatra bows as he is presented to HM Queen Elizabeth at the premiere of “Me and the Colonel.” 1958.

On Monday 10 December 1962, the royal party travelled through the freezing fog, to be greeted at the Odeon Leicester Square by Sam Spiegel, who escorted them along a line-up of cast and crew dressed in white tie.

The Queen shakes hands with David Lean with Sam Spiegel looking on.

Film-goers first watched Colonel T.E. Lawrence blow out a half-spent match and instantly transform the screen into a blazing red Arabian dawn.  Present too were Queen Elizabeth II and the Duke of Edinburgh. Almost not present was the film itself. Two nights earlier, the expensive 70mm print had been scratched. There were only two such prints in existence, and the other was under lock and key at Heathrow Airport, ready to be flown off to the USA. A frantic car journey was made to the airport, retrieving the New York print in order to save the world premiere.

Director David Lean and producer Sam Spegiel observe the Queen’s handshake with Peter O’Toole, who starred in the title role of “Lawrence of Arabia”.

“Good flick?” the Duke of Edinburgh asked Lean. Lean politely replied that he hoped so. He realised the Duke had meant no offence, inwardly he cringed at the term ‘flick’. The British Establishment’s attitude toward cinema as rather mindless entertainment was a live issue for Lean. Indeed, his own father had decided not to attend the premiere, finding the journey in to London too much trouble for a film.

The audience took their places as the overture’s unsettling, bellicose percussion crashes began. As the curtains opened the audience, more accustomed to black and white television, were soon transported into a succession of enthralling 70mm Technicolor images.  Such splendour, in such rich detail, was something very special for that particular era. 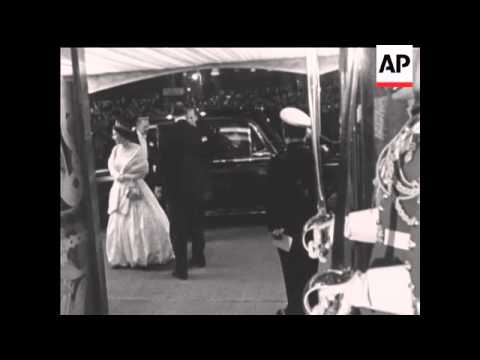 CLICK ON THE ABOVE FRAME TO WATCH THE NEWSREEL COVERAGE (silent)

The Queen (wearing the Grand Duchess Vladimir Tiara and the Delhi Durbar Emeralds) is joined by the Duke and Duchess of Kent as she attends the Royal Film Premiere of ‘Born Free’ at the Odeon cinema, Leicester Square, London  in 1966, in aid of the Cinema and Television Benevolent Fund on Monday 14th March 1966.

Sir Philip Warter, chairman of ABC cinemas, escorts HM the Queen & the Duchess of Kent at the Odeon Leicester Square.

1966 Meeting Julie Christie before the premiere of “Born Free” at the Odeon Theatre, Leicester Square, London. With Warren Beatty, center. 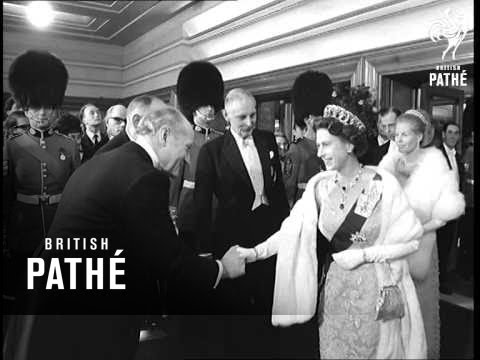 On the night of June 12th 1967, the World premiere of ‘You Only Live Twice’ took place at the Odeon Cinema in London’s Leicester Square, sponsored by the Variety Club of Great Britain.

Sean Connery arrives at the Odeon Leicester Square for the Royal Premiere “You Only Live Twice.” The first 007 film to be attended by the Queen.

Sean Connery and his then wife Diana Cilento were the star attractions, especially as it was Connery’s first British 007 premiere since ‘From Russia With Love’.

Sean Connery with his first wife Diane Cilento at the film premiere of the James Bond film ‘You Only Live Twice’.

Connery looked very un-Bond-like as he sported a bushy moustache and did not don his usual toupee.

The crowds began to gather outside the Odeon all hoping to get a glimpse of the stars that would be attending. What made this 007 premiere all that more special was the appearance of Her Majesty Queen Elizabeth II.

Sean Connery chats to HM the Queen. “You Only Live Twice” Premiere.

1967 Sean Connery and his wife Diane Cilento welcome the Queen to the premiere of Sean’s latest Bond film, “You Only Live Twice.”

“You Only Live Twice” broke the opening day record at the Odeon Leicester Square in London, and instantly became the number one film in the USA when it opened the following day.

Also present where Phil Silvers, Dick Van Dyke and Jerry Lewis, as well as members of the production crew such as screenwriter Roald Dahl and producers Albert Broccoli and Harry Saltzman. Guy Hamilton, who had previously directed ‘Goldfinger’, was also in attendance. 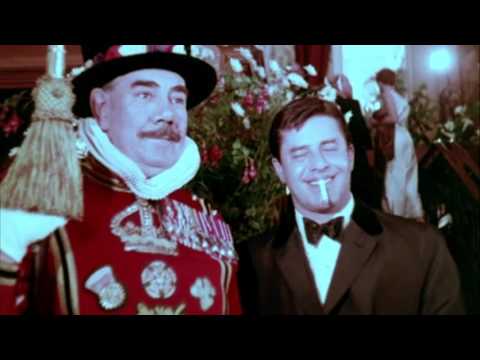 CLICK ON THE ABOVE FRAME TO WATCH THE NEWSREEL COVERAGE (silent)