The sheer energy of Oscar Deutsch, creator of the Odeon cinema chain, remains breathtaking. In just 10 years between the founding of the chain and Deutsch’s death in 1941, 258 Odeons opened throughout Britain, more than half of them in new buildings. They brought not only the latest British films and Hollywood movies, but also a standard of contemporary design that was absent from the lives of most people in these determinedly old-fashioned islands.

With their cloud-piercing towers and sweeping lines, Odeons were a promise of the shapes of things to come. The original odeions were the popular amphitheatres of ancient Greece. The name Odeon had been appropriated by cinemas in France and Italy in the 1920s, but Deutsch was to make it his own. The first Deutsch Odeon, built in a Moorish style, opened at Perry Bar, Birmingham in 1930.  It was one of the co-funders of the cinema  project – grocery store owner Mel Mindelsohn – who suggested the name ODEON after spotting it in Tunis, North Africa. Years later, it would become apocryphally known as ‘Oscar Deutsch Entertains our Nation’, a mere coincidence that Oscar’s name could be included into Odeon, which his son, Ronnie,  recently confirmed.

For less than a shilling (five pence), coal miners, railway workers, teachers, nurses, servicemen, typists and clerks could disappear into a shining world of futuristic dreams, a whole dimension away from the grim economic and political reality.

Entrepreneur Oscar Deutsch (1893 – 1941), founder of Odeon Cinemas, in his London office, 23rd November 1939. He is pictured signing an agreement with David Rose of Paramount Theatres, to take over Paramount’s UK cinemas that includes Leeds, Newcastle, Manchester and London.

Modern architecture and design had come late to Britain. It was often seen as a foreign conspiracy. The row over the appointment of a pair of Jews – one Russian, Serge Chermayeff; the other Prussian, Erich Mendelsohn – to design the De La Warr Pavilion at Bexhill-on-Sea appeared to confirm our worst suspicions. It did not matter that Chermayeff was a Harrow-educated designer of great taste and ability, nor that Mendelsohn was one of the greatest living European architects. They were foreigners who had taken jobs from our boys.

Deutsch’s architects were clearly well versed in the latest developments in European architecture, as well as the art deco decor that went, ticket-in-hand, with the movie business in the United States.

Of the surviving Odeons, eight are Grade II listed buildings, and one of these, in Muswell Hill (1936), is listed II*. There are other listed former Odeons up and down the country, but these have met the fate of so many British cinemas: they either stand empty, or have been turned into bingo halls. Others – Dudley, Luton and Woolwich – are churches. Grade II listed~Chester’s Odeon is now restored and integrated into a cultural centre re-named Storyhouse.

The Odeon chain flashed into life and burned out quickly. Deutsch’s life and his legendary business ran like one of those old, pre-talkie films where everyone, with boaters and canes, seems to be in a tearing hurry, even when strolling through a park. Deutsch was born at Balsall Heath, Birmingham, in 1893, the son of a Jewish scrap merchant, Leopold Deutsch, a Hungarian by birth, and Leah Cohen, a Jewish emigrant from Poland. Always sickly, but intelligent and quick, this tiny man was dead at 48. He was generous and sentimental – staff were offered interest free loans when they got into debt. His acts of everyday kindness were legion. Deutsch also worked around the clock. He had to: there was no other way so many new cinemas of such quality could be built in such a short space of time.

The business was nurtured in Birmingham, but required Deutsch to travel the country and make frequent trips to London. He travelled on the new two-hour trains from New Street to Euston in the late 1930s with a team of secretaries and assistants. Telegrams would be typed as soon as the train steamed across the points at Birmingham; as the express slowed for Coventry, bundles of telegrams, letters and other instructions would be chucked from the train, to be picked up and dealt with by station staff. Such a thing would be impossible today, with station staff much rarer than grand cinemas. A latter-day Deutsch would be one of those men constantly on his mobile phone, driving everyone else mad.

The first truly modern Odeons, however, came in a rush in 1935. The streamline age had arrived in a shock of glossy, curved surfaces. The first of the streamlined Odeons was South Harrow (AP Starkey, 1935). Like an ocean liner that had berthed inexplicably in a suburban high street, it occupied the space of a dozen shops, and offered not only a glamorous art deco auditorium, but also a café and radio shop. The contrast between the cinema and its red-brick suburban setting must have been as dramatic as the films flickering on the silver screen.

There was, though, another building in South Harrow to rival it: the new London Underground station designed by Charles Holden. These two building types – the modern tube station and the Odeon – developed simultaneously, at speed, throughout suburban London. The former took people to and from work in unprecedented style; the latter offered them a stylish escape from the reality of the factory, office and journey to work.

South Harrow was a low-lying building, but the Odeon Worthing (Whinney, Son and Austen Hall, 1935), an ambitious and expensive design, was the first with a tower, waving an architectural flag for Deutsch’s rapidly expanding empire. His real star, Harry Weedon, emerged that year. A racy character, this Birmingham-born architect was a talented pianist, as well as a former first world war pilot who had served in the Royal Flying Corps. Scandalously divorced after demobilisation in 1917, his business reputation lay like a heap of edited film on a cutting-room floor. In 1932, though, he met Deutsch, who liked men of action, and three years later he had designed, in between streamlined factories and petrol stations, the Odeon Kingstanding.

This Birmingham cinema, rising from a brick tide of some 10,000 new suburban homes, was as good as anything produced in Europe or the US. With Weedon in Deutsch’s stride, the Odeon chain produced one masterpiece after the other: Sutton Coldfield, Scarborough, Colwyn Bay, while, at Well Hall in south-east London, Andrew Mather borrowed unashamedly from Chermayeff and Mendelsohn’s Bexhill Pavilion: cinema design had become truly sophisticated.

Dazzled perhaps by his own success, Deutsch began commissioning monumental cinemas in 1936/7.  These were the Odeons at Chester, Exeter, Swiss Cottage, York and, most dramatic of all, that great, shining black temple to the movies, Leicester Square (the combined talents of Weedon and Mather). The building cost was £110 per seat, four times that of other major Odeons, and, for once, it opened behind time, in November 1937, with The Prisoner of Zenda, starring Ronald Coleman. With its leopard-skin seats, five-manual Compton organ, swirling expressionist- meets-art-deco decor, it was, quite simply, stunning.

As another war in 1939, Deutsch’s death from cancer in 1941, and the takeover that year of the Odeon chain by J Arthur Rank, drew down the curtains on this extraordinary experiment, matching a rapidly maturing form of popular entertainment with innovative architecture and design. It seems sad that in an age when cinema is once again hugely popular, so many of us are reduced to sitting in banal multiplexes to watch films on screens that seem little bigger than the latest TVs.

After Deutsch died of cancer in 1941, his widow sold the Odeon chain to J. Arthur Rank and it became part of theRank Organisation, who also bought, but managed separately, Gaumont-British Cinemas. 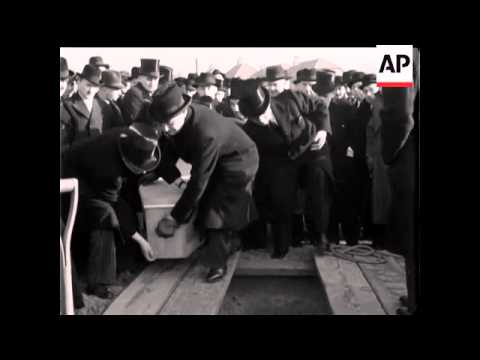 Oscar’s grave in The Hebrew Cemetery, Birmingham, with no mention of cinemas on the headstone

A friend and I made a quiet visit to the grave site about 10 years ago on a snowy day. The inscription refers to Oscar’s business interests and good works – with no reference to his cinemas!
Oscar’s first cinema that was named ODEON at Perry Barr in Birmingham is now a thriving Indian banqueting and wedding venue. It has a post war brick façade replacing the war damaged original.
I once spoke to a veteran member of staff who remembered the funeral cortege stopping outside the cinema. The staff stood on the steps in silence to pay tribute to this visionary individual.

Oscar Deutch was born On 12 th August 1882 in Balsall Heath to immigrant parents. His parents were involved in the scrap metal business Brennen and Deutch. Oscar founded the Odeon circuit and his first Odeon was opened in Perry Bar on August 4th 1930. He went on to run a chain of Odeon theatres and was often in attendance at their opening. Some having grander openings than others. Deutch was young when he passed away with cancer in 1941, he was just 48. His son Ronnie said that on occasions two Odeon cinemas would be opened on the same day. Crewe and South Norwood on 26th July 1937 being examples.

Oscar lived in Edgebaston Birmingham. Oscars wife Lillian was known for decorating interiors and it was said that no two cinemas had the same decoration. By 1937 there were 250 Odeons including their flagship cinema the Odeon Leicester Square, which replaced a resplendent building called the Alhambra theatre.

Mrs Oscar Deutsch, Lillian, was the interior designer for most of the original Odeon builds. She took great interest in the colour schemes, curtains, carpets and furniture. The distinctive Pel sofas, ashtrays, etc, were chosen by her.

According to her son, Ronnie, “she had a good eye for colours, particularly gold”, hence the expression~ “Gilded by Lily”.  Rich velvet materials, luxurious deep pile carpets were the order of the day for Odeon. Just as the distinctive exteriors played a role in establishing the Odeon brand, so too were the stunning art deco interiors. Each cinema being individually “Gilded by Lily”.  As “The charming and capable wife of the Governing Director” it would be her input that would be prominent in the final decisions taken.

Movie-going had become the national pastime, with close to a billion admissions annually in the UK. With the astonishing expansion of the new Odeon builds between 1930 to 1939, she was to be an important, and integral part of the success of Odeon. It is clear from the featured page of the Chester Odeon’s opening brochure, the high regard that was placed on her by her husband and his companies. 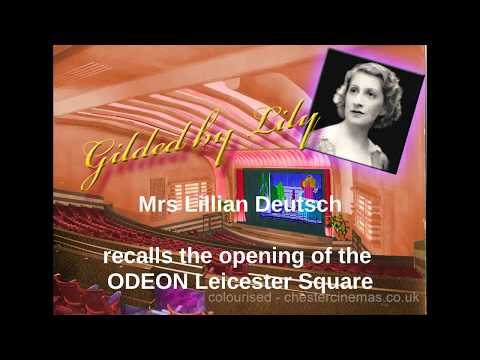 Widowed at an early age in 1941, she withdrew from her involvement in Odeon, selling her remaining shares to J Arthur Rank who was by then the majority shareholder. She was supported by her two sons, Ronnie and David.

Ronnie, who is now well into his nineties had little interest in films, unlike his late brother David Deutsch, who became a film producer in his own right, notably remembered for co-producing The Day Of The Jackal.

Lily lived until she was ninety six.