Electrical giant Philips, a Dutch company, have had their hand in a lot of pies when it comes to numerous electrical appliances. Apart from things including TV’s, DVD players and inventing the first domestic video cassette recorder sold in the UK they have been involved in film equipment for the film and TV world. A number of Philips projectors have found their way into the projection box. Most ABC cinemas installed them after discarding the Ross machines. A popular machine with ABC come Cannon was the Philips FP20 projector. Other models included the FP four and five. FP standing for Film Projector.
Philips produced the only machine to ever win an Oscar in 1963. The dual 35mm/70mm multi purpose projector known as the DP70. 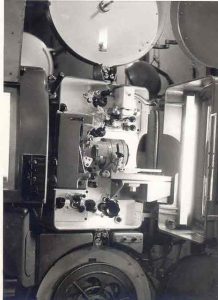 DP stands for double projector. This was first manufactured as early as 1954 and eventually became known as the Rolls Royce of 70mm machines. They also made a 75, which wasn’t as popular. There were around one thousand five hundred DP70 machines built between 1954 and the late 1960s. Machines were first exported from the Netherlands to America in late 1954.They were first used for the road show release of Oklahoma (1955) shown at thirty frames per second and at first were used exclusively as part of Mike Todd’s Todd-A0 system. Oklahoma was shot in two versions allowing theatres to screen a twenty four frames per second cinemascope version.
In the early days of scope a few films were shot in wide screen and scope because not all cinemas could not screen scope. Philips machines were at one point distributed by J. Frank Brockliss Ltd, London. In advertising they said, the dimensions of the gate are so computed that a splice enters the gate at slow speed; there is no strain on the spice, and picture jump is eliminated. In the remote event of a film break, the safety cut out immediately stops the projector; if the loops are too long or too short, they can be adjusted while the machine is running. It is impossible for oil to leak on to the film and ruin sound reproduction. 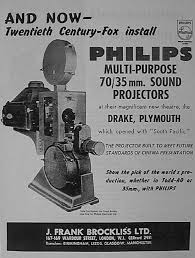 The DP 35/70mm machine made its debut in 1958 and was installed in a number of large theatres including the Astoria Brighton, the first installation in England with Philips sound, the Dominion, London, Odeon, Liverpool, Gaumont, Manchester, Metropole Victoria, London, Futurist, Liverpool the Drake, Plymouth and the run of Ben Hur at the Empire Leicester Square, London before the building closed for a new Empire on the same site. Apparently the same print was used throughout the run.
Some of the above cinemas had a new projection room built in the stalls area to screen the wide format due to rake problems. This involved removing a number of seats. They included the Astoria, Dominion and the Empire. Others, including the Odeon, Liverpool, the Futurist, Liverpool and the Gaumont Manchester projected the images from the original box. As well as projection, many installations included Philips sound. Others used Westrex and GB Kalee, which was at the Dominion.

The Dominion had water cooled Mole Richardson 490 arcs running at 130 amps fed by GB Kalee three phase rectifiers. Do any of our members remember Harold Copus at the Dominion and Percy Gough at the Gaumont Manchester. They were both congratulated by H. L. A Gimberg of Philips in Eindhoven for having completed a thousand runs of South Pacific with the original copies.
London’s smallest theatre to have the dual projectors was the Columbia theatre on Shaftesbury Avenue, which had been built on the site of the blitzed Pavilion. The chief in 1959 was a Maurice Parkin, who had previously worked at the Rialto in Coventry Street. The Columbia was the 35th Todd A0 installation in England by Frank Durban from Brockliss. The first pair were fitted at the Dominion in April 1958.
The Philips Multi-purpose machine was very versatile. There was a two speed belt drive allowing the film to turn at either 24fps or 30fps. After Oklahoma, shot at 30fps, the films were photographed at 24fps. This avoided having to make separate versions and a 35mm scope negative could be created from the 65mm negative. Automatic adjustment was provided to adjust the lens as it heated up.
Another Philips piece of ingenuity was the FP 20S projector with SPP Pulsed discharge lamp, eliminating the need of a flicker shutter. It was claimed that the lamp consumed only 800 watts and a thirty- six foot image was in excess of the British standard. The lamp with a life of around thirty-three hours pulsed three times a frame or seventy-two times a second. The first pair of FP 20S machines were installed at the ABC Preston.
Another early installation was at the Queen’s cinema in Bayswater, London where a control panel known as Brockliss- ABC remote control system was set up in the auditorium allowing the projectionist, sitting in the front of the circle to adjust settings including focusing, racking house lighting and volume control. The installation was overseen by ABCs projection engineer Nick Mole.
Another Philips offering was the FP7 model. In 1972 the cinema division was bought out by Kineton, a German company. They had previously handled European sales and support of Philips cinema products since 1949. In the USA the DP70 machine was known as the Norelco Universal 70/35mm Motion Picture Projector.
Because of the success of the DP70 others started manufacturing the dual projector. One of them was Cinemeccanica. They produced the Victoria eight and ten, the eight being more favoured and installed in a number of Odeon cinemas even if they weren’t equipped for 70mm presentation.