The Rank papier-mâché gong & the Gongmen who struck it

The papier-mâché gong displayed at the London Film Museum

There are many conflicting accounts on the history of one of the most famous British trademarks, the Rank Gongman. Many believed, incorrectly, that Bombardier Billy Wells was the first. The actual count is four men have struck the gong that appeared on cinema screens. There has also been one or two who were trialed and ruthlessly dropped.

In 2012, to celebrate the Gongman’s 75th anniversary, The Rank Group, the gaming company that in 1996 acquired the remaining business interests of The Rank Organisation as well as the rights to its logo and name, commissioned a new version of the Gongman featuring a model. The sequence was filmed in Sale, Manchester, above the Mecca Bingo Club. This version was to promote a nationwide competition to find a new Gongman, or woman for the 21st century revamp of the famous trademark.  The production of the latest version displays a real talent on how this new title has managed to  retain the dramatic impact of the original format, and yet makes it more acceptable in this digital age.  Chris Rowley from Stoke won the Gongman competition.

In the 1930’s Charles M Woolf and J Arthur Rank founded General Film Distributors. They required an opening trademark. Predictably, a wolf howling was one of the first ideas put forward. This was deemed to be similar to the MGM’s roaring lion. Woolf’s publicity secretary suggested a man striking a gong. When the Rank Organisation was established much later, with General Film Distributors within the company’s framework, the trademark title was adopted for the whole organisation. The Gongman filmed sequence depicts a man striking a huge gong with a deep resonant sound. The gongs used in the films were props made of papier-mâché, with the sound of the gong done at one recording by James Blades on a Chinese instrument called a tam tam.

Carl Dane a former circus strongman, was the first gong-banger. He filmed the first strikes in 1932. Fast deteriorating nitrate film stock meant the sequence had to be re-filmed frequently. Dane struck the gong 3 times. Later gong men struck it only twice.

The second “man with the gong” was “Bombardier” Billy Wells, a former heavyweight boxer. Wells was one of the best fighters of the last century, though he lacked ruthlessness. He was filmed at Walton Hall Studios, Isleworth. He continued in the role until after the Second World War. 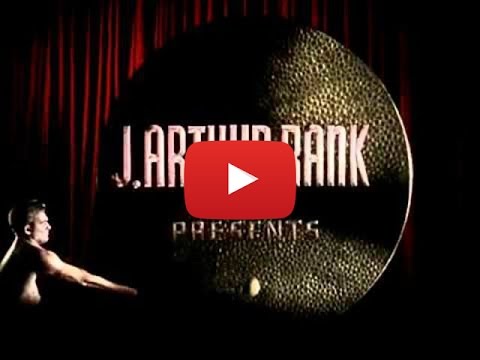 Then in 1948, it was deemed that Wells should be replaced and his successor was Phil Nieman, who was filmed at Gainsborough Studios, Shepherd’s Bush. Nieman’s image headed J Arthur Rank’s films until he too was replaced in 1955 by the most famous Gongman of them all, Ken Richmond. 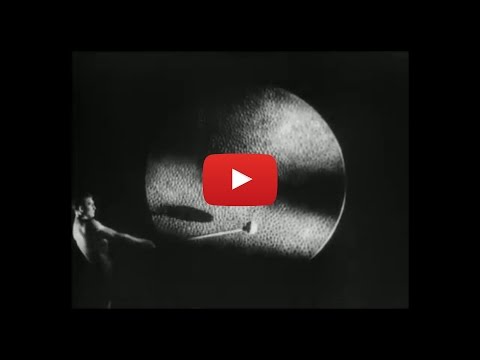 Richmond remembered, “If you had hit that gong, you would have gone straight through it!.” The Olympic wrestler (Olympic bronze in the 1952 Helsinki games) was paid a one off fee of £100 to pull on those shorts and glisten, one Sunday afternoon at Pinewood Studios. It was his image that endured the longest on screen, with little alteration, other than to the overlay titles, and to update the original sound of the gong strike. Millions who watched Ken Richmond on the screen were looking at a man who had a strong dislike of violence. A Jehovah’s witness, he was a conscientious objector during the Second World War and served several months in prison. As Rank’s gong banger he was simply irreplaceable.

In 1978, Rank discovered stunt man Martin Grace, who had been known for his Milk Tray adverts, and later as a stunt man in several 007 Bond movies. Grace remained on the cutting room floor and Richmond’s image was still used, until Rank left the film side of the business. He was the final Gongman as far as heading Rank  presentations on the cinema screens. Ken Richmond died on 3rd August 2006, aged 80

1980 marked the end of Rank feature films produced at Pinewood Studios. The final feature film made by Rank with the Gongman on the opening was “Silver Dream Racer” starring David Essex. After that point the trademark gong was still used, now with Rank Film Distributors overlaid.

The Gongman image remains to this day, restructured, owned and used by The Rank Group.