Exterior view of the Regal,Marble Arch.

THE Regal cinema Marble Arch first put in an appearance in 1928 and opened with the sound on disc film ‘The Singing Fool’. This ran for ten weeks, no doubt for many, this was the first time they would have experienced the new wonder of sound in the cinema. After ten weeks the film was transferred to the Piccadilly theatre. The cinema was built for AE Abrahams and his son David. Abrahams had a small chain of Regal cinemas in London, including Uxbridge and Edmonton. Its slogan became ‘The Best in the West’.

The architect of this fine building was Clifford Aish and the cost was a staggering £500,000. The frontage of the Regal towers were higher than Marble Arch and were Portland stone in a free rendition of the Renaissance style. The facade was flood lit at night and was visible from Hyde Park corner and Knightsbridge. There were three ornamental bronze and glass doorways, which were flanked by black marble surrounds. The auditorium was horseshoe shape and it was said this approaches the ideal, both as regards acoustic and usual requirements.

Seating was luxurious, being upholstered in “panne” velvet with leaf design in October Brown and gold. The first person to manage the theatre was a Mr R. Shirley Simpson. In 1931 he went as circuit manager for ABC. His replacement was a Mr R Brough Johnson. There were two lifts at the Regal to transport people, if they wished, to the circle area. Telephone boxes were another feature. The cinema also had an oriental feel. There were spacious lounges and the lower ground floor was Chinese with Chinese, Chippendale furniture. Panels were treated with specially hand painted Chinese figures on a cream ground, the lighting units being in oriental design. Oriental attendants were employed to serve in that area. 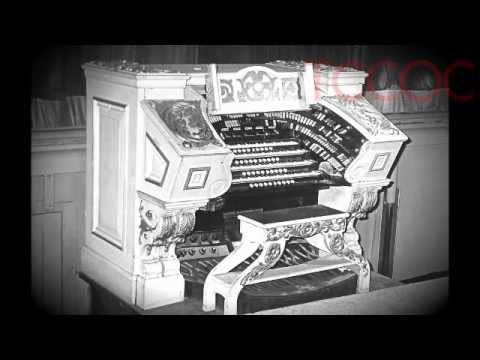 Click on the above frame to listen to the Christie organ

Music was provided by the magnificent Christie four manual organ. It was Europes largest organ. It was said in advertising: The Chosen Instrument for Britain’s Premier Cinemas. It had two hundred and seventy five stop keys and included a full concert grand piano.

Quentin M Maclean drew up the specifications for the instrument. He was one of the top organists in the country and was engaged to play at the Regal. In 1930 Maclean left to play at the Trocadero, Elephant and Castle and Reginald Foort took over. In addition to the Christie the Regal was the first picture House in the world to install a Carillion to be used with the film presentation. The Carilion consisted of thirty two bells,fully chromatic, the largest unit weighing 6 hundred weight. Another unique feature was that it is played from the organ console, or as an instrument by itself. In the latter case a standard piano keyboard was employed.

Proscenium of the Regal, Marble Arch.

The chief projectionist was a Mr P Pilgrim. He was an inventive type and was responsible for early wide screen pictures at the Regal. When screening Gold Diggers of Broadway, a cleverly produced effect of magnifying the picture was achieved by a magnifying lens, costing around thirty shillings in 1930, plus the inventive faculty of the Mr Pilgrim. The lens was constructed by Taylor Hobson to Mr Pilgrim’s specifications. There were four projectors at the Regal, which were Simplex, with Ashcraft arcs.

Prince and Princess Arthur of Connaught

Guests at the opening included Prince and Princess Arthur of Connaught. After the opening film, the 2400 guests saw a film of the royal guests arriving. It was reported in the illustrated London News, December 8th 1928 by Michael Orme that the main idea of the decoration was to give the illusion of being out of doors. This was achieved by mural landscapes, stucco trails of Virginia creeper, and a roof in the form of a pergola (festooned with vines bearing bunches of grapes) open to a sky lit with artificial stars.

The Regal was one of many cinemas making their debut in 1928. Some say it was the year of the super cinema. Other London cinemas opening that year included the Empire Leicester Square and the Davis theatre Croydon. Provincial openings included the Woolton Liverpool and Palladium Blackpool. The Bioscope in July 1929 reported that the Regal’s usherettes keep fit by exercising on the Roof of the cinema with fitness instructor Pat O’Keefe.

Less than year after opening the cinema was acquired by the ABC circuit, on the 28th September 1929. ABC ran the theatre until January 1945. It was then taken over by the Odeon circuit. They refurbished it, but before opening the building received damage from a flying bomb. It was the 9th September 1945 before the curtains (tabs) opened for the first time under Odeon.

The Odeon , Marble Arch was the first cinema in the UK to screen 3D, employing two projectors, running together in sync. The first 3D attraction was Bwana Devil shown from the 20th March 1953. On 22nd March 1964, the old Regal, come Odeon closed its doors with the film ‘The Long Ships’. The magnificent Regal/Odeon was demolished to be replaced with an office block and a new Odeon, which opened on the 2nd February 1967 with A Funny Thing Happened on the way to the Forum. This closed housing five screens on the 8th May 2016 and like the Regal before it, was demolished. 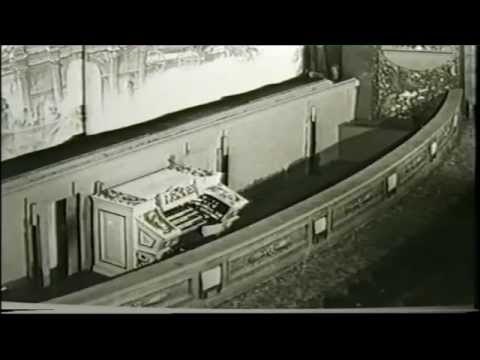 REGAL, Marble Arch video. Click the above frame to view