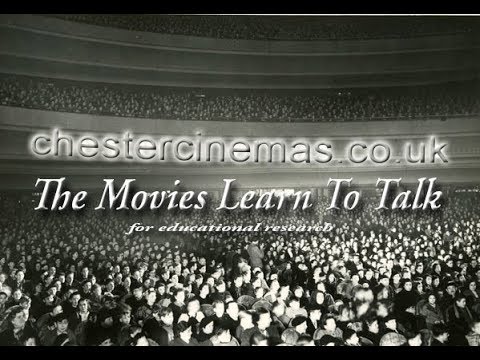 click on the above frame to watch “Movies Learn To Talk”

The arrival of sound filled some exhibitors with dread knowing a small fortune would have to be spent on it. Some cinemas closed rather that spend money on something that may not take off. But if exhibitors wanted to stay in business there was no choice. Also filled with dread were the musicians that made a living from playing to the silent movie.

Sound burst on to screens for a short period after Dr Lee De Forest invented the Phonofilm system in 1923. This was sound on film but wasn’t taken seriously and later disc systems came along. The Phonofilm system was demonstrated to the Royal Society of Arts in late 1924. The demonstration consisted of a comedy scene with a telephone A violin solo played by Max Rosen, a speech delivered from the garden of the white house by president Coolidge, a solo by singer Madame Di Pasquali and a speech on the system itself.

In 1925 Warner Bros looked into the possibility of sound on disc to accompany the moving image. The system had been developed by Western Electric and the Bell Telephone Laboratories. A number of companies had been offered the system and all had turned it down. Harry Warner was one person that could see the possibility. In 1926 the system given the name Vitaphone was given its first public demonstration. A year later Fox- case Movietone was announced. This system was developed with inventor T W Case. Both the Vitaphone and Movietone systems belonged to the Electrical Research Products Company, which was a subsidiary of Western Electric.

The General Electric Company devised a sound on film system called the Pallophotophone, which became RCA Photophone. This was a variable area system. Movietone had the density system.

Musicians became redundant as sound took off and ironically projectionists suffered the same fate with the arrival of single manning, due to long running equipment, such as towers and the non rewind (cakestand) system. Later, digital cinema brought about the end for the majority of projectionists, management, in most cases, taking over the role of programming the equipment.

Though some cinemas have retained their film projectors, most have been thrown in the skip. The projectors that are still running will eventually need spares, so it is important to retain equipment even if not used, so that redundant equipment can be used for spares, as spare parts will be hard to obtain in the future. Who knows, they may make a comeback like the good old record player. Not holding my breath though.

The Western Electric sound system was a favourite with many exhibitors in the cinema world. It was based at Bush House in London, which became home of the BBC world service. Western Electric was part of the American Telephone and Telegraph Company and was founded in 1869 and served as the primary supplier and purchasing agent to the Bell system.

It was a very large organisation, and apart from reproduction equipment for cinemas, played a big part in the recording side, it’s name often displayed on film credits. In 1928 they only had 400 cinema installations, leased through Electrical Research Products Inc. Prices at that time ranged from £1000 to £3000 for a fifteen year rental. They stated at the time that Western Electric will not promise results if their film is used on rival projectors, or if rival film is used on their machines. Regarding advertising their products, it was said: Checking upon its advertising schedule during 1929, Western Electric announce that it took more advertising space in the film trade papers of both America and Great Britain than any other manufacturer of talking picture equipment.

Servicing was was done on a regular basis until 1931. The service engineer carried out an equipment inspection each fortnight, and every six months the technical and acoustical inspector carried out more exhaustive checks. It was stated that exhibitors attached great importance to the six month service, which were thorough, and guaranteed uninterrupted running.

By January 1931 the company had decided to switch from fortnightly visits to monthly. It was stated that the suggestion that Western Electric intends to service its theatres but once a month as an experiment is rather a violent change to spring on the exhibitor, and to give a definite opinion as to whether it will work satisfactorily in the majority of cases, is hard to foretell. It certainly adds a feather to the cap of the projectionist when the gap in between servicing can be widened by fifty per cent. It is getting near the day when we shall require service no more and only a trouble call department will ever be required. Then if the exhibitor will pass over to the projectionist half of what he saves in service charges, what a happy New year 1931 will be for all of us.

1931 Was also the year that the company brought out noiseless reproduction at no extra cost to the cinema owner. Advertising stated that they were investing thousands in the system. In March 1931 a new type A was announced costing £785. Managing director ES Gregg said, “The new equipment is an attachment system for use in connection with Simplex projector heads and pedestals, and designed to operate from an AC 50 cycle power supply.

There was an announcement in April 1931 that Gaumont British were installing the system in its key theatres. By January 1931 a total of 1200 British cinemas were equipped with the unit, including the Phoenix London, Savoy, Folkestone and the Palladium, Paisley. The 1500th British theatre to be fitted was the Ritz Edgeware. The occasion was celebrated by a special luncheon given by the directors of WE at the Savoy hotel.

Western Electric was a highly successful company dealing in cinema sound systems including the highly praised Mirrophonic system. Many cinemas decided state what sound system they were using in their publicity. Chester’s ABC Regal used the system. Other leading manufacturers included RCA, installed at the Classic Chester and British Acoustic in use at the Gaumont, Chester. Western Electric ceased on 7th February 1996.

RCA sign from the Tatler/Classic, given to Roger Shone by Jack Lightfoot, the final chief projectionist.

Sound systems included Radio Corporation of America (RCA), Western Electric, British Acoustic and British Talking Picture. Sound was optical, variable area and density being mono only. On an area track you could see the intensity of sound by the lines on the track. To get an optical track in sync the loop below the intermittent sprocket had to be the right size. If it was, a diamond, which is printed on the leader, would be in line with the optical system in the sound head. If the loop was too big, sync would be affected slightly. A lamp called an exciter lamp would be employed to focus on the track. This would shine on the track and would pass through a photoelectric cell, turning the light into electrical current that went to a pre amplifier before being fed to the main amplifier. Sound heads were usually designed to carry two exciter lamps, allowing a quick change if there was failure.

When cinemascope arrived in 1953 Fox released films carrying four magnetic sound tracks. The film also carried a half optical track. Theatres not equipped for four track would be sent an optical only print.  The sprocket holes were smaller on these prints and were known as Fox Hole. Strangely enough, films carrying these tracks were advertised as being in stereophonic sound when stereo is only two tracks and four would be quadraphonic. The sound head was above the projector head and with these prints you had to make sure you didn’t erase the track. Also shedding of the oxide could be a problem.

Stereo sound wasn’t new in cinemas, back in 1953. In 1940 Disney’s Fantasia was screened using four optical tracks on a separate reel. In the 1980s we had Dolby stereo. This was optical sound that carried four tracks and was split and fed to four amplifiers. The last optical tracks to be used were cyan tracks using what was known as a red reader instead of the original exciter lamp. DTS was used. This is a CD disc that runs in sync with the film, an advanced version of sound on disc. Even if the film were cut, sync would still be kept, because time code is used. There was also Dolby Digital. There was a digital sound head fitted above the projector head. Information was between the sprocket holes on the optical soundtrack side. Theatres that weren’t equipped for Dolby Digital could use the stereo optical tracks.