At the beginning of 1930 plans were put forward by Carlton Entertainments Ltd for a large cinema in the inner-city area of Tuebrook, Liverpool, with a seating capacity of 2700. These plans were quickly revised and re-submitted within a few months, outlining a modern “Kinema” that would cost £100000. The architect involved was Ernest A Shennan who had designed a now 2284 seat venue. Following more than a years delay, fresh plans were drawn up by the same architect and again submitted by Robert Duncan French who was secretary to Carlton Entertainments Ltd, both men sharing the same office at 14 North John Street, Liverpool. French was also the secretary of William Gordon’s circuit of cinemas, but it isn’t clear if the Carlton was built for Mr Gordon. (At the Carlton’s opening ceremony it was said that the theatre was “a non-combine, locally owned, 100% British super cinema”). Robert French was named as secretary to numerous Liverpool cinema companies.

Immediately the trimmed down plans were approved in the summer of 1931, building work commenced on 27th July 1931 by the local building contractor, Charles J. Doyle, who completed the cinema within ten months. The sign off for the building work was on 28th May 1932.

Positioned on a conspicuous site on the corner of Green Lane and West Derby Road, the Carlton Theatre was considered to be a well designed and built cinema venue serving the residents of the Tuebrook area and one of the first cinemas in city and suburbs to have its own car park. At this point of time it was claimed to be the second largest cinema in the Liverpool area (after the Commodore in Bankhall which held 1966 movie goers).

The facade was of sand faced brickwork with decorative stone dressing placed over the windows and matched with stone slab edging in the same colour. The main entrance on Green Lane had an eye catching steel canopy that displayed the programme’s films on a read-o-graph, below this was a porch area with a span of five sets of double doors that led to a wide vestibule where the impressive cash desk with it’s etched glass panels was in  central location and flanked on either side by double doors that took customers into the manu-marble floored main entrance foyer.

The entrance vestibule with the cash desk placed centrally.

From here access to the stalls and balcony staircase enabled customers to access the auditorium.  On the first floor was a cafe that had a Chinese willow decoration theme etched onto the glass panels in the screen walls. The main colour scheme was jade green lacquer with embossed Chinese figures completing the tasteful design. It could offer dining facilities for 110 customers.

The luxurious seating was described as golden brown mohair velvet. The stalls held 1252 seats and was arranged in three sections across the raked floor.  In the balcony a cross over gangway divided the area, providing 252 seats in the front balcony and 408 seats in the rear, making a combined balcony capacity of 660 and a total capacity for the building being  1912 seats.

The walls of the auditorium were plain rough cast plaster finished. Large plaster cast scenes depicting leaping stags were placed above the balcony level. The same stag designs were repeated on the screen curtains, creating a pleasing effect. Dark wooden dado were fit at the base of the walls.

The wide proscenium had angled wings containing a series of prominent vertical gold coloured ribs on either side, effectively illuminated by concealed lighting. A polished walnut Christie console, 3 Manuals 13 Ranks theatre organ was placed on a lift centre stage in the orchestra pit.  Several dressing rooms were available for artists who made “live on stage” appearances.

“Delightful Musical Interludes” were played by James N Bell, pictured at the Carlton’s Christie theare organ on the opening day.

A Grand Gala opening took place on the afternoon of Saturday 11th June 1932 when Liverpool’s Lord Mayor, J. C. Cross officially opened the cinema before an invited audience. “Delightful Musical Interludes” were played on the Christie organ by James N Bell. The general public were admitted at the evening performance.  The first feature shown that day was “My Wife’s Family” starring Gene Gerrard.  The admission prices ranged from 7d to 1/6d, and matinees were only 4d, 5d & 7d.

ABC (Associated British Cinemas) took control of the Carlton from 12th June 1935. The projection suite was equipped with Ross projectors and RCA sound equipment which was typical technical issue for the company.

Business remained buoyant during the 30s & 40s, then dipped at the start of the 1950s. In common with other Liverpool cinemas CinemaScope was brought in to entice customers back. The proscenium of the Carlton proved to be ideal when CinemaScope was installed during 1954. The first featured shown in CinemaScope on 20th December was a Warner Bros film -“The Command” starring Guy Madison.

Audiences began to decline sharply, so much so that in June of 1959 non continuous programming was introduced with matinees now only shown on Mondays, Wednesdays and Saturdays.

The cherished Christie organ that had been played on a regular basis by crème de la crème theatre organists throughout the Carlton heyday was now redundant and sold to a private collector who removed it towards the late 1950s. In 1963 it was installed in the ex. Servicemen’s Club, formerly the Regent cinema, Stotfold.

Also at the end of this decade the cafe closed, the space being utilized for ABC’s District Office. The Regional Engineer, Gordon Rowley, was now permanently based here.

A large extension was built on the car park side of the building. This would provide an ABC Bowling Centre that opened on 28th January 1962. At this time the cinema’s name was shortened to ABC (Carlton removed). 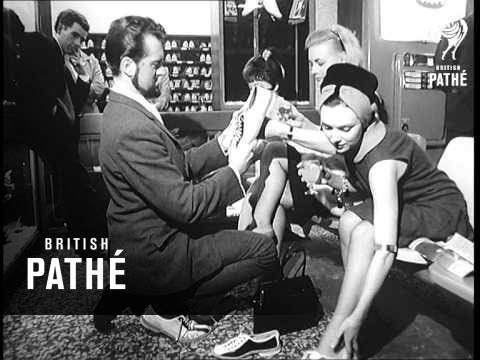 Click on the above frame to view the opening of the ABC Bowling Centre, Tuebrook.

Further alterations took place in 1972 when the stalls area was converted into a pub called The Painted Wagon (later the Lord Derby). which was accessed by an entrance on Derby Road.  The cinema area was formed in what was the original balcony area with a seating capacity of 636. The original proscenium and side wall features were now covered over by curtaining. The unused front stalls area was left on view from the re-vamped cinema. It re-opened on 27th March 1972 with the feature film “Love Story” starring Ali MacGraw & Ryan O’Neil. At the same time the ABC Bowling Centre was converted into Castaways nightclub (later the Coconut Grove).

The cinema business transferred from ABC to an independent operator, D J S Lambert, on 9th July 1980. The cinema was re-named the Carlton. Little more than 18 months later the cinema suddenly closed on 4th December 1982. The final films shown were “Cat People” and “Death Valley”.

The sorry state of the long abandoned projection room of the Carlton, Tuebrook.

The building then lay derelict for nearly 34 years before being demolished in November 2017.