Final films shown: “The Thrill of it All” starring Doris Day.

Under construction. The Rialto photographed in 1927.

Built on a prominent corner of Upper Parliament Street and Berkeley Street in the Toxteth district, approximately one mile from the city center. The Rialto (Liverpool) Ltd commissioned this building with a budget of £57000. The directors of this independent company included Hugh Bicket, who had interests in the Glynn and Music Hall cinemas in Chester and the Savoy in St.Helens. The Liverpool architects were Gray and Evans of North John Street who were tasked with designing a complex that would accommodate a cinema, ballroom,  billiard hall,  a large cafe and twelve good sized shops, all under one roof!  The builders were local contractors, William Griffiths and Cromwell, based in Upper Duke Street. The steel work was supplied and erected by McIntyre and Sons Ltd, another Liverpool company.

The local contractor for the copper domes of the Rialto cinema.

The white tiled frontage had a balcony over the sweep of entrance doors with sets of double pillars supporting the structure, flanked by two imposing tower structures.

The cinema was so planned that it could be used as a theatre or cinema with an 18′ deep stage and dressing rooms provided for the artists. The auditorium seated 500 in the balcony and 1305 customers in the stalls equalling a total capacity of 1805 customers.

Shown at the Gala Opening of the Rialto cinema.

W. Peel Smith. The first manager of the Rialto.

The Lord Mayor of Liverpool officially opened the Rialto on 7th October 1927. The manager was W Peel Smith who had moved across from the Trocadero in Camden Street. The first movie to be shown was the silent pre-release feature “The Last Frontier” starring William Boyd. A vocal prologue and musical accompaniment was provided by The Southern Melody Quartet.

The large 60 table cafe was tastefully themed with wall murals depicting scenes of the Wye Valley that were framed with white and green trellis that had artificial flowers and foliage entwined. It was appropriately named the Rialto Garden Cafe.

The splendid ballroom had walls that were decorated with painted scenes of Venice. It boasted a fine sprung floor that was bordered with tables and chairs, accommodating 500 couples who danced until the early hours to the music of the Billy Cotton’s London 12-man Savannah Band. Admission to the ballroom stipulated “evening dress essential”.

The painted scenes of Venice in the Rialto’s plush ballroom.

The auditorium was described as “a vast apartment draped in cloth of gold” . These can be seen on the early photographs where drapery can been seen on the walls. The stage drop curtains complemented this effect with the same tone of gold material that had high reflective quality when lit by the footlights.

The Rialto ~ The view across the 500 seat balcony.

The remaining wall decorations were huge panels that were displayed in varying deep hues that again blended perfectly with the overall rich gold theme with sky scraper shaped shafts pointing upwards towards the ceiling. The painted block pattern ceiling was of an immense single span that was unsupported by pillars thanks to the girder work of McIntyre & Sons Ltd. This method of steel framed construction was relatively new at this period of time and boasted that the audience now had an unrestricted view of the stage, as supporting columns were no longer required.

The impressive proscenium of the Rialto with the large drop pendant house lights.

Lighting was provided by large drop, moth-like lanterns. The auditorium had superb acoustics which proved to be a bonus later on with the introduction of sound.

The independent ownership of this futuristic development lasted little more than six months when the Rialto was taken over by Gaumont British Theatres during March 1928.

Al Jolson’s- “The Jazz Singer” was the first sound film presented on 4th February 1929. At this time the cinema was enjoying buoyant business, particularly as for the majority of  time it was on a film booking par with the city centre Gaumont British owned Trocadero. This policy continued until the company converted the Hippodrome Theatre on West Derby Road, Anfield as a cinema in July 1931. Over a period of time it was decided that the Rialto would run concurrent with the Hippodrome, playing mainly second run features, after the Trocadero.  Despite this, the Rialto maintained good admission levels.

Viewed from the stage. The full expanse of the Rialto’s auditorium.

With the amalgamation of the Gaumont and Odeon  circuits in June of 1948, the Rialto found that it was now in the newly formed Cinema Management Association portfolio controlled by the Rank Organisation. The concurrent booking with the Hippodrome was gradually phased out and replaced with playing National Circuit releases of less popular films booked into what was then considered old or inferior cinemas, leaving the best films to be played on Odeon or Gaumont screens. 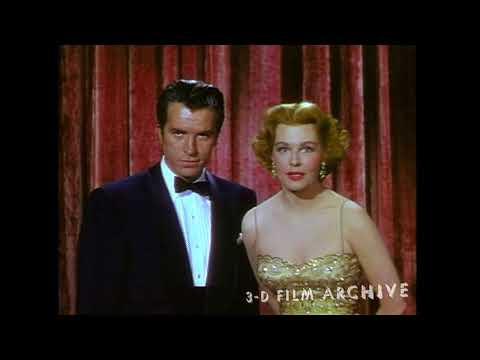 Like most cinemas in the 1950s the Rialto had to look towards novelty presentations such as 3D to try and arrest the declining ticket sales. The first 3D presentation took place on 3rd August 1953 with Paramount’s “Sangaree” starring Arlene Dahl and Fernando Lamas. This clumsy gimmick was short lived.

CinemaScope at the Rialto was one of the better installations of this format due to the generous width of the proscenium. “Sign Of The Pagan”, starring Jeff Chandler and Jack Palance was the first CinemaScope feature shown on 21st February 1955.

During 1962 the company changed the name CMA to Rank Theatre Division and again a stifling booking policy was implemented for the Rialto that destined it to play the less appealing product of the National Release, leaving the quality films to play at the city centre cinemas.  This deprived the Rialto of much needed business and set a course towards closure.

Eventually the Rialto closed on 29th February 1964. The final film shown was “The Thrill of it All” starring Doris Day.  Fortunately several members of staff transferred to the Royal Hippodrome Theatre.

The complete building was purchased by Swainbanks Ltd who then converted it into commercial premises selling antique furniture.

A sad ending with the Rialto in flames.

The Rialto burns in the Toxteth riots.

In July 1981 the building fell victim to the Toxteth race riots and was destroyed by arsonists. It was demolished and replaced with a development of shops and offices that were named Rialto House.