Can it be imagined todays cinema audience could be encouraged to an interval of community singing led by words on the screen with a bouncing spot on the words in case they lost their place? Yet this was the case in cinemas that were fortunate to be equipped with a cinema organ. Initially the organ was intended to replace the orchestras that accompanied the silent films. Sound on film hurried in and a lot of red faced cinema owners were left with a very expensive investment on their hands. The solution was simple, turning the organ playing into an event in the middle of the film programme. So successful was this idea that the cinema organ installations continued on numerous new builds during the 1930s. To witness two thousand patrons singing at the top of their voices was something very special. The projectionists made certain that full presentation of colour changes took place during the sing song. Some cinema managers insisted that the organist remained until the end of the show to play the National Anthem.

The GAUMONT cinema was equipped with a Compton organ. This was one of only two that would be employed in Chester cinemas. The only other cinema to install the mighty Compton was the Regal, in 1937. Organist in the opening week was Leslie James. He was famous having made many broadcasts and recordings. A Mr. Rowland H. Cutler went on to become the full time organist. Later, the keyboards were in the hands of Sydney Gustard. He broadcast from the theatre and his recordings on HMV can still be found.

The only Organist recording exclusively for H.M.V. 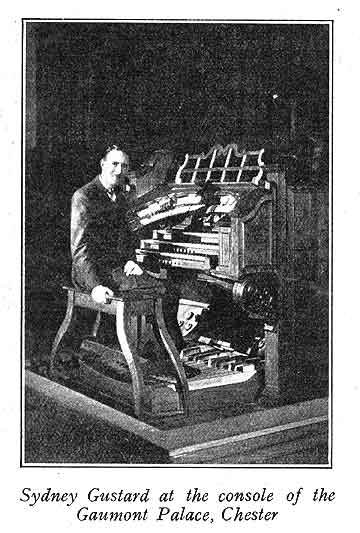 The cinema organ undoubtedly owes a good deal of its present popularity to the vast number of gramophone recordings which are sold all over the world, and I welcome the opportunity of relating some of my experiences at recording sessions. The “man in the street” has a very hazy idea of how records are made, and lots of people must wonder how an organ, which of course cannot be taken to the studio, is recorded at all. In this case, Mahomet comes to the mountain, in the shape of a recording van.

I well remember the day, about four years ago, when the H.M.V. recording van rolled up to” the Trocadero, Liverpool, to make my first tests on the small 6-unit Wurlitzer there. Recording has made vast strides since then, but those early efforts still sound very fresh and sweet, and the “Cuckoo Waltz” I believe is still one of the best sellers. The recording van, which you see in the accompanying photograph, is a completely self-contained recording studio, and is valued at about £10,000. It weighs 7 tons, contains two recording machines, loudspeaker, and a vast amount of very delicate apparatus.

It is connected by land-line to the microphone, which is slung in front of the organ shutters, a loudspeaker stands near the console, also a signal light which is illuminated while recording is in progress, and the recorders are in telephonic communication with the organ console. There is a good deal of preliminary work to be done before the van arrives, as each title has to be carefully timed and suitably arranged for recording. As soon as everything is ready, we proceed to make a test record, which is played back through the loudspeaker. This gives both recorders and performer some idea of what the finished article will be like. Probably a particular stop or combination of stops appears dangerous to the recorders, and after making the necessary adjustments, we go all out on a master record. The wax on which the original sound trace is cut is 1 inch thick, and rotates horizontally on a heavy turntable, a ” stylus ” cutting the trace of the sound waves, as it is fed towards the centre of the disc. The ” play-back ” of the test record, to which I previously referred, is performed by means of a special electrical pick-up, the wax being too soft to take an ordinary pick-up needle. This wax of course is then Useless, but as soon as a ” master ” has been made, it is at once numbered and carefully packed off to Hayes, where it goes through the various stages of development until he finished record appears.

A recording session can be very nerve-racking on occasion – sometimes everything goes smoothly (on one occasion we made ten records in two mornings), but sometimes everything goes wrong, and one has to play the same title over and over for hours on end, until one never wants to hear the wretched tune again. I am fortunate at Chester in being able to record in the mornings, but I remember two sessions at the New Victoria, London, when we were at it from 11.30 p.m. until 5.30 a.m. The small hours of the morning are not exactly ideal for a soulful rendering of “Love’s Old Sweet Song,” and I must have almost fallen asleep on the second “master,” as the recorders rang through to enquire (verv politely) ” why the —- I had gone an inch over the edge.”

The Chester organ is ideal for recording purposes, the two chambers being situated over the proscenium arch, and judging by the letters I have received from organ enthusiasts since broadcasting began, it apparently comes “over the air” just as effectively. One of our most interesting experiments here was when we persuaded patrons to remain after the show and try their voices in community singing with organ accompaniment. A test record was made and played back to the audience, and how they sang on the subsequent “master”! The chief difficulty was to restrain them from singing in the non-vocal items. Every organist has some amusing experience which sticks in his memory , and I can distinctly remember an occasion here at Chester when I played a little trick on the audience with one of my records. The record was synchronised through the talkie loudspeakers with my playing, and at an agreed signal, a complete “black-out” enabled me to disappear behind the console. When the spotlight was flashed on the empty console, with the record playing, we managed to have the audience suitably mystified, but what I didn’t bargain for was to overhear the remark (from the “ninepennies”), on my return to the console, “Didn’t I tell you he never really plays that —- organ!” Which goes to show how very careful we organists have to be in these mechanical days.

**SYDNEY GUSTARD FOR THE PLAZA**

Broadcasting and recording cinema organist Sydney Gustard, whose recitals in the BBC’s Northern programmes have become so popular with hundreds of listeners, severs his connection with Gaumont British at their Palace cinema, Chester, to come to the Birkenhead Plaza on March the 8th.

Mr McAree, manager of this popular and progressive luxury house, is to be congratulated in securing the services of this extremely talented and famous organist. Mr Gustard takes the place of the late Lewis Oddy, first cinema organist in Birkenhead, whose death at an early age, occured suddenly three weeks ago. Since 1919 Sydney Gustard has been playing cinema organs, and started broadcasting from Chester in 1932.

He has been on the air regularly since then, and last Saturday made his 215th broadcast. His radio recitals have brought him letters from all over the world. Gustard said: “I have travelled all over the country playing cinema organs and I can assure you organ playing plays havoc with the seat of one’s pants. I’ve worn out hundreds of pairs. When he comes to Birkenhead to play the Plaza’s magnificent Compton organ, he hopes to continue his radio work.

Organist DAVE NICHOLAS at the Gaumont Chester’s Compton organ in 1960. A year later the cinema closed and the organ console was destroyed.

Click on the above picture to read more about DAVE NICHOLAS

OPENING OF THE COMPTON ORGAN.

The organ was opened in 1937 by Wilfred Southworth, and was played by ABC’s team of touring organists, which included Horace Piling. The organ interludes continued until the late 1950s. The organist most associated with this instrument was Joseph Storer, who broadcast it. Its sound in its original location can be heard on part of an LP recording issued in the late 1970s, of archive tapes made by organist Frank Gordon. Chester’s ABC Regal Compton organ was very typical of its make and vintage, being designed to be played for short solo interludes of perhaps twenty minutes. Powerful Tuba rank was essential to accompany the two thousand voices in the community sing a-long.

The ABC the organ remained in use until the mid 1960s, being played only on a Saturday morning. However, during one of the stage shows, a member of a pop group accidentally stepped onto the organ which was covered with a black cloth. He badly gashed his leg.  It was decided there and then that the console was to be removed, and the organ chambers and blower rooms were converted into much needed extra dressing rooms.

The complete organ was sold to, and removed by organ-builder Ron Curtis, of Bolton. In 1971 it was sold to Blair Linnett, and shipped to Australia, without the console illuminations and the Melotone unit.  Blair extended his garage to form a studio auditorium of some 20,000 cubic feet, with a maximum ceiling height of eighteen feet. He installed the organ at one end of the studio, with the two chambers side by side and the console, with new wooden sides and a bench which he constructed, on a rostrum to the left.It took him some ten years to reconstruct the organ.

The Regal’s was one of several very similar organs built for Associated British Cinemas (ABC), which controlled a large circuit of cinemas throughout Britain. It comprised six ranks of pipes, with a three-manual console fitted with curved opalescent glass side and top panels which were illuminated from within by multi-coloured lights, perhaps the nadir of decadent vulgarity. The organ’s six pipe ranks were supplemented by an electrophonic attachment known as a “Melotone” unit, which emitted through a large horn-type loudspeaker sounds generated by rotating discs through an electro-static process.

The organ illustrates the development of the theatre organ into a punchy, dance-band-style instrument, with a high degree of unification, and yet different “chorus” build-ups on each manual.

The ranks of the restored Compton organ from the ABC Regal, Chester.

This is entirely consistent with Compton’s aim, even on the smallest organs, of providing some degree of tonal variety between the manual choruses. Although the organ has only six ranks, two of these are extended to full 16-ft. compass, providing a very solid bass. The 32-ft. Acoustic Bass is another Compton speciality. This is not, like so many of its ilk, a mere 16 + 10 2/3-ft. combination from the Tibia, but in its bottom octave it plays a chord of four harmonics, and, when used with full pedal, provides with uncanny realism the effect of a 32-ft. reed. From Tenor C upwards, the Acoustic Bass sounds the 16-ft. Tuba an octave lower.

Click on the above picture of Paul Crofts to read how he tracked down the ABC Regal’s organ. Now fully restored and in it’s new home on the other side of the world.