Can it be imagined todays cinema audience could be encouraged to an interval of community singing led by words on the screen with a bouncing spot on the words in case they lost their place? Yet this was the case in cinemas that were fortunate to be equipped with a cinema organ. Initially the organ was intended to replace the orchestras that accompanied the silent films. Sound on film hurried in and a lot of red faced cinema owners were left with a very expensive investment on their hands. The solution was simple, turning the organ playing into an event in the middle of the film programme. So successful was this idea that the cinema organ installations continued on numerous new builds during the 1930s. To witness two thousand patrons singing at the top of their voices was something very special. The projectionists made certain that full presentation of colour changes took place during the sing song. Some cinema managers insisted that the organist remained until the end of the show to play the National Anthem.

Wilfrid Southworth, the organist who played the Compton Wonder Organ at the Grand Opening of the ABC Regal on Saturday 30th October 1937.

Within 10 months of this date Wilfrid tragically drowned while on holiday in Challaborough Bay near to Plymouth, at the young age of 38.

The organist most associated with this instrument was Resident Organist -Joseph Storer, who made recording and broadcast from the ABC Regal.

Its sound in its original location can be heard on part of an LP recording issued in the late 1970s of archive tapes made by organist Frank Gordon. Chester’s ABC Regal Compton organ was very typical of its make and vintage, being designed to be played for short solo interludes of perhaps twenty minutes. Powerful Tuba rank was essential to accompany the two thousand voices in the community sing a-long.

The Compton organ remained in use until the mid 1960s, being played occasionally on a Saturday morning. During this time ABC’s Musical Director, Joseph Seal, had published a for sale list of cinema organs that were no longer required by the company. Chester’s organ was open for offers over £550.00 and was snapped up by the well known organist Ron Curtis of Bolton. It was agreed that, as an experienced organ builder, he would dismantle and remove the complete assembly at a mutual convenient date . However, during one of the stage shows, a member of a pop group stepped onto the glass surround of the organ console which was covered with a black cloth. He badly gashed his leg.  It was arranged with Ron Curtis that the console was to be removed off it’s lift within days of the incident. The chambers were cleared of pipework soon after. These rooms were then converted into extra dressing rooms.

As a young man Ron Curtis was employed by the John Compton organ builders.

In 1971 it was sold to Blair Linnett, and shipped to Australia, without the “rainbow” illuminated console surround or the Melotone unit.  Blair extended his garage to form a studio auditorium of some 20,000 cubic feet, with a maximum ceiling height of eighteen feet. He installed the organ at one end of the studio, with the two chambers side by side and the console, with new wooden sides and a bench which he constructed, on a rostrum to the left. It took him some ten years to reconstruct the organ.

The Regal’s was one of several very similar organs built for Associated British Cinemas (ABC), which controlled a large circuit of cinemas throughout Britain. It comprised six ranks of pipes, with a three-manual console fitted with curved opalescent glass side and top panels which were illuminated from within by multi-coloured lights, perhaps the nadir of decadent vulgarity. The organ’s six pipe ranks were supplemented by an electrophonic attachment known as a “Melotone” unit, which emitted through a large horn-type loudspeaker sounds generated by rotating discs through an electro-static process.

The organ illustrates the development of the theatre organ into a punchy, dance-band-style instrument, with a high degree of unification, and yet different “chorus” build-ups on each manual.

This is entirely consistent with Compton’s aim, even on the smallest organs, of providing some degree of tonal variety between the manual choruses. Although the organ has only six ranks, two of these are extended to full 16-ft. compass, providing a very solid bass. The 32-ft. Acoustic Bass is another Compton speciality. This is not, like so many of its ilk, a mere 16 + 10 2/3-ft. combination from the Tibia, but in its bottom octave it plays a chord of four harmonics, and, when used with full pedal, provides with uncanny realism the effect of a 32-ft. reed. From Tenor C upwards, the Acoustic Bass sounds the 16-ft. Tuba an octave lower.

Opened at the Majestic Theatre, Pomona, Queensland Austrailia on 6th July 2019, to continue its proud history for many more years to come.

How marvelous!! Saturday 6th July 2019, the opening of the fully restored John Compton organ that once graced centre stage of the massive 2000 seat ABC Regal in Chester, entertaining countless thousands of local people during the heyday of cinema. It now takes pride of place at the Majestic Theatre, Pomona, Queensland, Australia.

An historic Cinema organ which once entertained thousands of people in one of Chester’s much loved but long gone picture palaces has been given a new lease of life thousands of miles away in a theatre in Australia.

The organ, formerly installed in the ABC Regal cinema on Foregate Street in Chester was removed from the venue in the mid 1960s before being shipped to the other side of the world in 1971.

Organist & restorer, Ron Curtis who removed the Compton from the ABC Chester

Whilst the organ of the Gaumont Palace Cinema (now Mecca Bingo) was destroyed when the building ceased to be a cinema, happily, the same fate did not befall the Compton organ of the ABC Regal (now part of Primark/Cafe Nero). The organ, installed in the Foregate Street cinema in 1937 was carefully removed by Organist and engineer Ron Curtis and his team from Bolton and in 1971 was sold to organ enthusiast Blair Linnett and shipped to his home in Brisbane, Australia. Mr Linnett extended his garage to form a purpose built studio auditorium and carefully reconstructed the organ over the next ten years. When Mr Linnett sadly passed away, the future of the instrument was uncertain until that is, his family gifted the organ to the Majestic Theatre in Pomona, Queensland where with the support of the theatre’s former owner and resident Organist Ron West, Organ builders Don Clark and John Brooks set about restoring the organ and installing it in its new home.

Now, after a six and a half year period the organ is in full working order again and an event to celebrate the completion of its restoration took place at the Majestic Theatre recently with a party which included renowned Australian Theatre Organist David Bailey playing the organ to accompany a silent film. The Majestic Theatre which will celebrate its 100th anniversary in 2021 is the oldest theatre in the World to still show silent movies continuously with regular screening attracting capacity audiences.

The history of the organ’s original installation at The ABC Regal in Chester was featured during the recent event to mark the completion of the installation and restoration work with photographs of the organ in its original home projected on to the cinema screen in the Queensland theatre. The event also featured a good luck message from a former projectionist at The ABC Regal, Peter Davies, one of the founders of the popular website ChesterCinemas which contains a wealth of photographs and archive material about Chester’s long lost picture palaces.

Peter, who has been following the progress of the restoration work with regular updates from the team in Australia, supplied the photographs of the organ in its Chester home for the celebratory event in Queensland.

Speaking about the former Chester cinema organ being fully restored and played once again Peter said “Many people can remember the marvellous experience of listening to this fabulous theatre organ. It was originally installed in the Chester’s third and final “super cinema”, the ABC Regal, which was the largest and most opulent cinema in the city. My personal memories of hearing the Compton was during 1951 when as a youngster I was taken by my parents to the Regal. During the interval the lighting would change dramatically as the illuminated console rose from the orchestra pit, central to the stage and levelled to above the footlights. The side lighting of the theatre’s proscenium would go through a programme of colour changes. The illuminated console would be on a motorised colour change sequence which was independent to that of the proscenium. The resident organist was Joseph Storer, a typical showman of this era. Immaculately dressed with blonde wavy hair and a smile that could be seen in the far reaches of the theatre. He would go through a programme of popular tunes that were well known to the audiences who were accustomed to community singing.

Peter added “Ten years later I joined the projection staff as a trainee. By then, the days of the Compton organ interlude had past, apart from an organist who would play on Saturday mornings for the children’s programme. In the mid-1960s however, the decision was taken to remove the organ and convert the organ chambers into dressing rooms. The console was removed quickly after a member of a pop group stood on the illuminated section of the console surround, badly gashing his leg that had gone through the glass. I was present when Ron Curtis dismantled the console off its lift, and then later as he and his team carefully stripped out the organ chambers. Thankfully Blair Linnett purchased the organ in 1971 shipping it across to Australia. Although Blair sadly passed away a few years ago, I was delighted to hear that his family had ensured the organ’s future by gifting it to the Majestic Theatre In Pomona. There are many cinema organ enthusiasts in Chester and around the UK who are following the progress of this fine Compton organ and indeed the restoration that has taken place. I send my very best wishes for the continuing success of this marvellous instrument in its new home.”

Ron West who at 87 years young still plays regularly to accompany the Majestic Theatre’s popular silent film showings said “Some eight years ago an unusual weather event caused flooding in Pomona and there was six inches of water over the floor of the auditorium of our theatre which caused extensive damage to our existing theatre organ which had originally been installed in the Regal cinema in South Shields in North-East England. Although the console was not affected as it was on a small platform, the area containing the mechanical parts which provided the air for the pipes was filled with water. This was not discovered until over a week later but by then the damage had been done and sadly, it was a write off. When the Linnett family heard what had happened, negotiations took place and they very kindly donated the ABC Regal Chester organ to the theatre. Don Clark and John Brooks have done a magnificent job, painstakingly dismantling the organ in Brisbane, transporting it to Pomona and then re-building and restoring it over a six and a half year period, including building new authentic Compton style side panels for the console to replace the illuminated panels which had been scrapped. We are delighted that this 81 year old organ originally from Chester in the UK is now known as the Blair Linnett Memorial Organ. The organ will be used regularly to accompany our popular screenings of classic silent movies and will we hope continue to be played and heard for generations to come.” 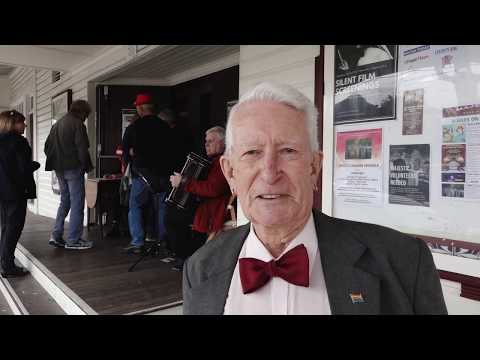 Click on the above frame to watch the Restoration Party